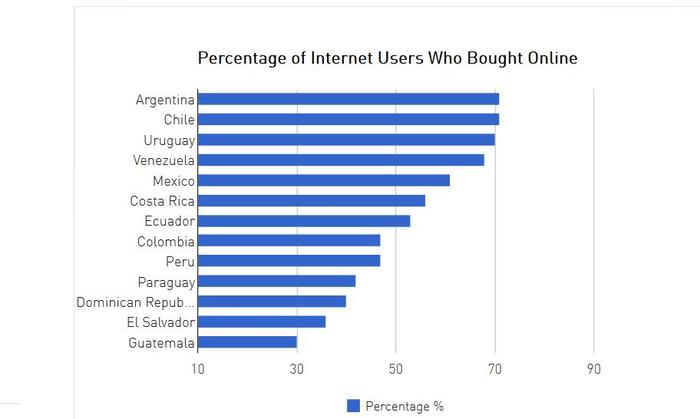 In Latin America, B2B ecommerce sales reached $48.14 billion in 2013 and are expected to increase by 19.8% to total $57.69 billion this year. Latin America is a recent addition to the major contenders for global online dominance, but had the fastest-growing online population globally during the last year, driving a significant increase in ecommerce and digital advertising throughout the region. Digital buyers in Latin America will be only 90.3 million in 2014, whereas they are 529.6 million in Asia Pacific and 178 million in North America. Although, the number of digital buyers is increasing with the increase of internet penetration. The amount of Latin American internet users conducting online shopping grew even faster than the amount of people getting online.

In terms of individual countries, Brazil is leading the ecommerce in the region, with 30.9 million online shoppers in 2013. Mexico ranks second with 8.4 million online shoppers, followed by Argentina with 7.5 million. By 2018, online shoppers in Latin America are expecting to be 118.7 million. Among them, one-third will be Brazilian (55.4 million),18 million Mexican and 12 million Argentinian. Clearly, the online world is expanding in Latin America at a rapid rate and ecommerce is following suit.

In Latin America, 76.5% of the population declared having made a purchase online in 2013. Firstly, it is important to note that online shoppers in Latin America tend to spend a lot of money on their internet purchases. Among online shoppers, 66% made a purchase via a desktop, 32% via a smartphone and 24% via a tablet. The majority (76%) shops from home and 12% from a workplace.

In contrast to other areas of the world where ecommerce is still developing, it seems Latin Americans prefer to carry out more of their online shopping using international rather than local websites. Although, 55% of Latin Americans buy on market place Mercado Libre (eBay’s Latin American partner site). In Brazil, online market places MercadoLibre and B2W Digital and the price comparison website Buscape have strong positions within the ecommerce landscape. Nevertheless, the entry of international companies, such as Wal-Mart and EBay, attracted by the market potential and the opportunities offer by the World Cup 2014 and the Olympics 2016, makes the Brazilian market competition more intense. In Argentina, top local ecommerce site is Garbarino, with 23% of online buyers spending money on this website. In Chile, the local ecommerce site Falabella has the highest purchase rate (41%). Falabella is also the local site of choice for 41% of Peruvians. In Colombia, the site with the highest reported purchase rate is Éxito (31%).

There are four major factors that influence the online purchase process for Latin American consumers and make them more likely to make a purchase. The first is going directly to an ecommerce site, then followed by entering a keyword into a search engine. After this, comes the influence of online advertising, followed by the influence of recommendations from family and friends.